ISLAM:
THE BROADER PERSPECTIVE
The Legacy of Abraham 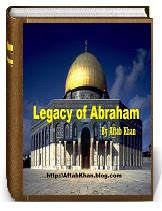